During the 1970 and 1980’s the company forged a reputation as a leading pattern shop for expertise and reliability.

In July 1990 50% of the business was sold to Werner Stepen then the remaining 50% to John Lally in January 1991, which saw the business move to Blackburn.

On July 1st 2001 the business was taken over by Ian & Leigh both fully qualified engineering patternmakers. They immediately upgraded to the latest 3D CNC machining technology, which included a VMC1020 Hartford and Mastercam CAD CAM software.

On the August 9th 2004 Williams Patterns moved to the current location 2-4 Queen St, Nunawading, Melbourne, Victoria, Australia, and have since installed a second CNC machine, the S3092 Quantum.

For advice from quality engineering patternmakers come and see us at 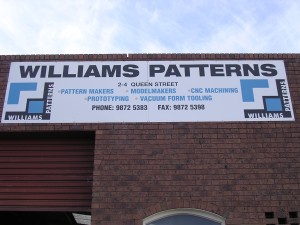 Home of the engineering patternmaker